Snipe, on the water meadow

I did manage to get out briefly yesterday, to check on the Garganey. They were both still present mid-afternoon, the male continuing to engage in display behaviour! The current run of ‘missed birds’ however continued, with a Yellow Wagtail, female Redstart and Common Sandpiper all being reported in the morning. Then, to top it off, Andy comes across a Lesser Spotted Woodpecker late afternoon!

Coot, busy building a replacement nest for the one they abandoned, due to bovine disturbance

This afternoon, I decided to get down to the park to see if any of yesterday’s interesting species had remained.  First success came in the form of the pair of Garganey, still present on the water meadow at 2 o’clock but I couldn’t find them on my return an hour and a half later. Also present was an Oystercatcher, a Snipe and two pairs of Teal. The Coot were busy rebuilding their nest in a different location, having abandoned the original site. There was a Marsh Tit near the screen and a Common Sandpiper, roosting on the western edge, before flying across the lake towards Boat House bay. A rather subdued Whitethroat was singing from the brambles, south of the dam. I was in the grazing meadow trying to get a photo of the Whitethroat when I heard the distinctive call of a Yellow Wagtail. I eventually located it, feeding around the cattle, accompanied by a few Pied Wagtails – one of which was a good candidate for a White Wagtail. Passing by the reed bed, on my way home, the Reed Warbler gave a brief burst of song before quickly falling silent. Whilst looking for the Garganey again, I found a Yellow wagtail – probably a second bird.

Yellow Wagtail feeding around the cattle, grazing meadow, south of the dam

and finally, a probable second bird on the water meadow, seen soon after

Lastly, a grab shot of the Whitethroat – bramble hedge, south of the dam

Of non-birding interest – the first spike of Early Purple Orchid, has appeared along the dam

This morning I made up a little for my recent run of missed birds by finding, for me at least, a ‘Felbrigg first’, in the form of a superb pair of Garganey, on the water meadow. I was on my way to a meeting and took the scenic route along the middle path to the lake. As I reached the water meadow, I was struck by how few ducks there were – just a handful of Mallard and five Teal, but there on the bank, was a pair of Garganey! There have only been a couple of previous records of this scarce summer visitor at Felbrigg. They were still present this evening.

A few more shots of these lovely birds 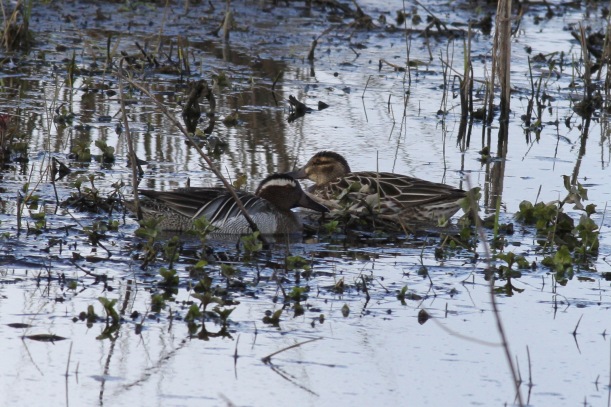 Clutch of Coot eggs exposed to the elements, Felbrigg Park

The weather here has just been dreadful. Spent most of the day in Norwich but did manage to get into the park, between the showers, late afternoon. Not surprisingly, with a strong north-westerly blowing, there was virtually no bird activity – I did manage to hear a couple of Marsh Tit in their usual locations, around the back gate and viewing screen, but precious little else. As I stood by the sluice, scanning the water meadow, I noticed both adult Coots were on the water. I checked the nest from the path and, sure enough, the clutch of eggs were fully exposed to the elements. With temperatures down to about 6 degrees, I fear that their prospects for survival are pretty slim. If the adults have abandoned, I think we can all guess the reason why! Further up the water meadow, a lone Snipe was flushed by the wandering cattle. I took a long walk down the course of the Scarrow Beck, returning via Common Plantation. Whist sheltering under an oak tree, from one of the sharp pulses of hail, I was delighted to see a Cuckoo fly silently around the edge of the wood and disappear – my first sighting at Felbrigg this year. The male Mandarin was also on the lake on my return home.

Went to check on whether the Dunlin was still present on the water meadow, which indeed it was – as, unfortunately, were the cattle! 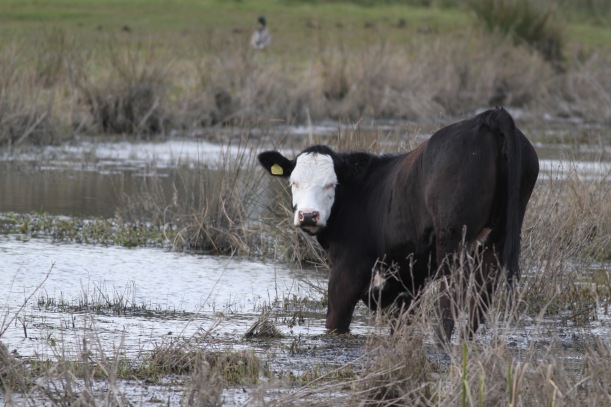 I fear this may put an end to further breeding attempts by any waterbirds or waders. We’ll have to see I guess.

Dunlin – a rare bird at Felbrigg

I was up at dawn to lead a Spring Song & Breakfast event at Cley NWT. It was hailing on the drive over and there was a bitterly cold wind blowing when I arrived. Despite the weather, the dozen or so enthusiastic participants did manage to see or hear several interesting species including a splendid summer plumage Spotted Redshank, Whimbrel and Whitethroat.

Then it was back home for a Felbrigg Park Breeding Bird Survey stock-take meeting, at the Hall. We’d just got back to the cottage – via the allotment, when Tim & Dawn called by to say that they’d found a Dunlin on the water meadow! I’ve only seen Dunlin at Felbrigg once before and that was about ten years ago – so there was no hanging around. The bird wasn’t on view when I got there but it did finally appear from the inlet on the western edge of the water meadow. A bird in transitional plumage, just beginning to show some dark belly feathers.

Here, being chased by a Lapwing 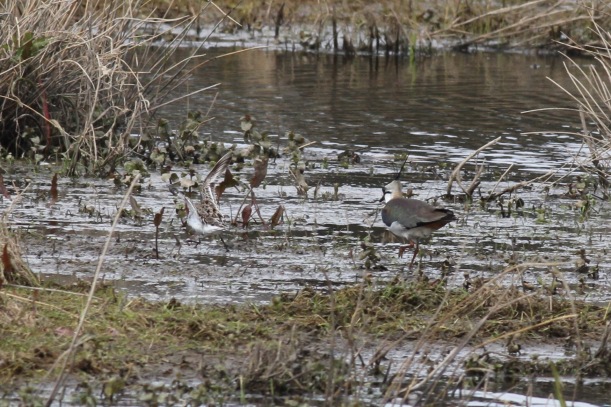 The afternoon was spent exploring Thwaite Common where, in the space of ten minutes, I saw a Cuckoo followed a male Ring Ouzel – though it took me nearly an hour to get a second confirmatory view! Just as I was coming away a flock of eight Curlew flew low, north across the Common – another unusual inland record.

Calling Cuckoo, Thwaite Common – roll on my first for the year at Felbrigg! 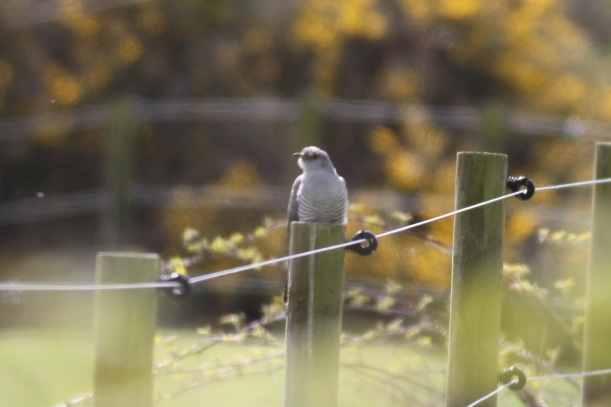 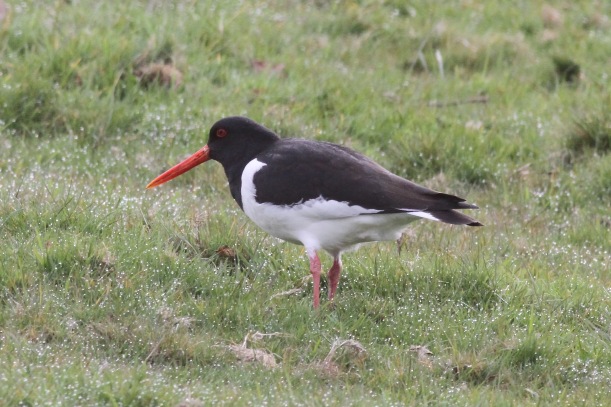 One of the pair of Oystercatcher, feeding in the early morning dew

Managed to get out into the park before breakfast – the weather being overcast and cold. There was little of note on my way round and no sound of yesterday’s Reed Warbler in the reed bed. It was heard singing later though – presumably once it had warmed up a bit. The Oystercatchers were busy feeding on the grazing meadow, east of the dam and the very pale Buzzard was again sat on a fence post, along the Scarrow Beck.

After spending practically all of yesterday in the Park, doing bird walks for NENBC & NT, I didn’t manage to get out today until late afternoon. This meant that I certainly missed out on Moss’s two Crane, seen over the Park this morning – gnash! There was the usual stuff on the water meadow, including the rather odd looking female Mallard-Shoveler x, with ten remaining chicks, a couple of Snipe, the pair of Oystercatcher and a lone Lapwing. Over the lake, a mixed hirundine flock included the two Martin species and Swallow. The very pale Buzzard was soaring over Common Plantation along with two more regular looking birds. Little Owl was calling from the oaks near the dam. Highlight of the walk was Reed Warbler, found by Simon, and heard only, but more evidence that summer is on it’s way!