It’s been a glorious day and as I’ve been preoccupied with family and other things, an evening walk around the park seemed a good idea. The baby Tawny Owl were still present in the same few trees along the shelter belt. We only found three tonight. At the lake there were two male Mandarin roosting on the islands by the viewing screen. As we walked along the dam there was a male near the bottom sluice and, as we approached The Warren, another by Boat House Bay. It’s possible that the original two quickly left the roost and flew across to the other side of the lake, as we made our way along the western shore, or there may be up to four males now present. We had the same discussion during the NENBC club walk the other evening – only time will tell.

Two of the juvenile Tawny Owl, still much in evidence along the shelter belt

P.S. Congratulations to Ken & Carol who saw twenty Black-tailed Godwit flying over the lake this morning. Only the second record of this species in the park, that I am aware of!

Yesterday afternoon I was in a neighbours garden when I heard the familiar squeaking call of young Tawny Owl. I managed to locate one individual out in the open but the other two remained hidden.

The final activity of the NENBC’s  Spring Social and Wildlife Activity Event was a Bat Walk in Felbrigg Park. We’d just got to the edge of the park, opposite the Wood Yard, when one of the group spotted a rufous-looking adult Tawny Owl sat out in the open. Further along the path through the shelter belt I heard juveniles up in the oaks. We stood watching as, one by one, they flew to the adjacent tree – a total of FIVE!

That, together with four species of bat, a Barn Owl and a Little Owl, provided a great finale to the Club’s 2015/16 Indoor Meeting Programme. 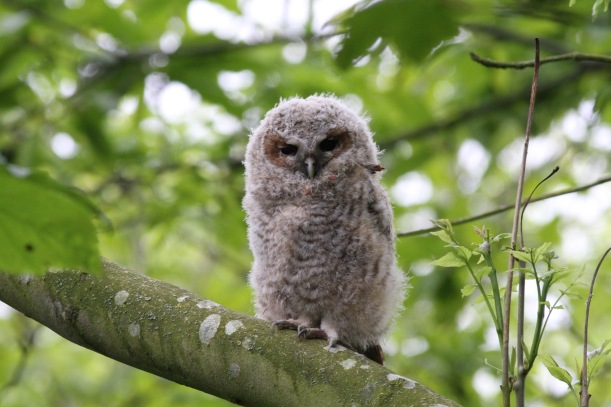 Victor and Jane at the top sluice

Enjoyed a pleasant stroll around the lake this morning with Victor, my octogenarian father-in-law. He wanted to see the various sites I mention in this blog. As we drove in to the main car park there was a Little Owl sat on the pillar at the corner of the walled garden. It quickly flew off towards Park Farm (Sector 4 of the Felbrigg Park BBS). We eventually located the pair of Garganey roosting on the eastern edge of the water meadow, with the Mallard flock. A distant Oystercatcher called from the Metton direction and Chiffchaff, Blackcap and Whitethroat were all singing in various places along our route. A spotty young Robin was busy feeding by the lake (Sector 5, FPBBS) whilst several Reed Warbler were singing and chasing each other in the reed bed.

The unseasonally cold weather continues, with temperatures still in single figures, grey skies and near constant drizzle all day. But despite this, birdlife in the Park this afternoon was excellent – three species of owl, Garganey and Grey Wagtail, all making for a very engaging walk. The first owl species was Little, which flew out of the oaks, east of the lake, and into it’s favourite tree, south of the dam. Next, the regular Barn Owl was hunting through the shelter-belt. Finally, the familiar sound of young Tawny attracted my attention but, despite it’s near constant calling, I failed to locate initially. Eventually I found both adults and, just when I’d given up and set off home, I noticed a fluttering high up in a near-by oak. It turned out to be a big fluffy youngster! The pair of Garganey put in a brief appearance on the water meadow and around the lake an adult Grey Wagtail was busy collecting food – presumably for a local brood? 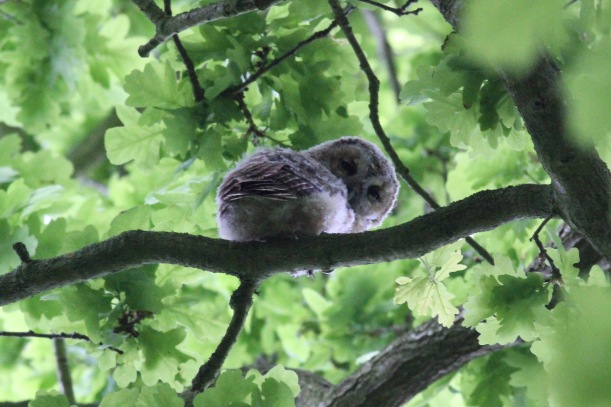 It’s been two weeks since I was last in Felbrigg Park and whilst the vegetation has clearly advanced from Spring to Summer, the weather most certainly has not! Down the lane, through the village, I was surprised to see and hear a Siskin overhead – it’s getting late for these traditional winter visitors and I’m beginning to suspect that we might have a locally breeding pair. There was a Mistle Thrush and a Great Spotted Woodpecker further down the lane, whilst a Blackbird, obviously feeding young, was by the back gate. A Whitethroat was blasting it out from the top of a tree near the start of the middle track to the Lake, with another along the Weaver’s Way, and a Little Owl near the hollow oak. On the water meadow I was pleased to see what looked like a ‘resident pair’ of Lapwing defending territory from another visiting pair. There were three Gadwall, a male and two females, flying up and down, but no sign of the Garganey – although I did bump into Richard later on, who told me that he’d seen the pair there earlier. Reed and Sedge Warblers were both busy in the reed bed and on the lake itself, two male Mandarin, a male Tufted and five Coot. There were plenty of Sand Martin overhead and a pair of Oystercatcher flew south over the water meadow. Chiffchaff and Blackcap were still singing in the shelter-belt on my return. We’re well into the ‘summer period’ for breeding birds now with much activity but much less song. I noticed also that several of the Mallard are beginning to moult into their eclipse plumage, so the seasons are definitely advancing.

It’s the Norfolk Bird & Wildlife Fair at Mannington Hall this coming weekend. The NENBC will have a stand there and will be running regular bird walks around the stunning grounds. Last year, nearly 60 species were seen over the two days, highlights included: Firecrest, Barn Owl, Spotted Flycatcher & Grey Wagtail. If you are in the area, do call in and see us. Further information is available on the Club website.

Meanwhile, for birding news from further afield, Hungary to be precise, do check out https://trevorontour.me

It rained on and off all day, so I spent the time catching up on domestic duties and preparing for our forthcoming trip to Hungary. The most notable bird of the day was a splendid male Siskin, visiting the garden feeders.

Yesterday was the NENBC Big Sit event and, as last year, the Felbrigg Team were located at The Warren, from 05.00 – 20.30. We recorded 76 species, just a couple short of last years total. Highlights included: the ‘resident’ pair of Garganey, four Mandarin, three – possibly four Spotted Flycatcher, two Garden Warbler – a ‘first for Felbrigg’ for me, an early Whimbrel on the Water Meadow (only my second), Greenshank – an early morning ‘touch-down’ – another Felbrigg ‘first’ for me, and, the undoubted highlight – first picked up by Tim, a female Montagu’s Harrier, which made it’s way from over the Great Wood, along the western edge of the park, before finally drifting off over Metton Carr. This was probably the same bird, picked up by Paul at Muckleborough Hill, another NENBC Big Sit location, an hour or so earlier. There have been a couple of previous Aylmerton records, of birds flying along the Cromer Ridge, but I think this is a new bird for Felbrigg Park!

A tremendous effort by all involved at the four NENBC Big Sit locations. To everyone who took part, kept watch, provided sustenance or showed support – a big thank you. Full results from all the sites will appear in the Club Newsletter in due course.

Whinchat, a Felbrigg ‘first’ for me

I was out early this morning, doing a reconnoitre for tomorrow’s NENBC ‘Big Sit’ – check our website for details. All the usual stuff was around, including singing Sedge & Reed Warbler in the reed bed and Mandarin and Garganey on the lake. Best bird, however, was a Whinchat on the fence line, below the dam. Although I’ve seen Whinchat in the parish, I’ve not managed to catch up with one in Felbrigg before now.

Another shot of the Whinchat,  –  female, on fence posts below the dam

Singing Sedge Warbler. One of two birds this morning in the reed bed

As I was walking home, my pager announced the presence of a Black-winged Stint at Cley NWT. Amazingly, only the second appearance of this species on the reserve. We arrived at the board walk just as the hides were emptying, after the bird had flown off of Simmond’s Scrape and gone down on to Cricket Marsh. Watching from the footpath, opposite the warden’s house, I noticed a black and white bird in the distance, fly up and over West Bank. Thinking at first that it was a Lapwing, I was delighted to see through my binoculars long, trailing, pink legs! We headed down the coast road, where the stilt had paused briefly before heading west towards Blakeney. Now why couldn’t that have been on the water meadow!

Black-winged Stilt – only the second record for Cley NWT 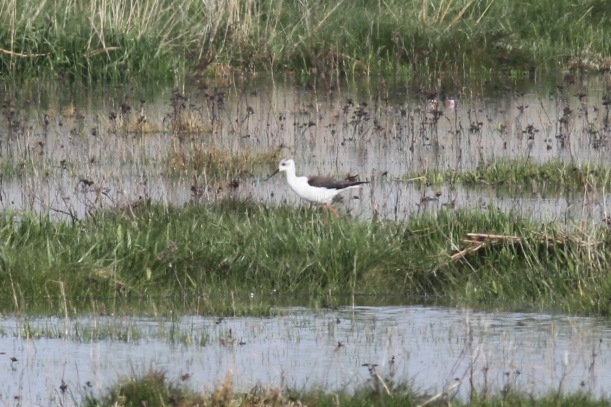 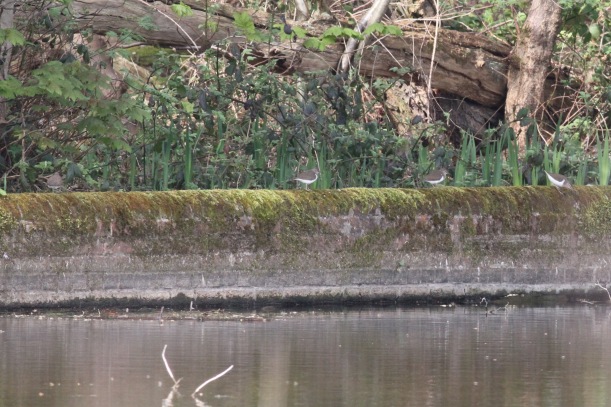 Part of the group of six Common Sandpiper, the dam, Felbrigg Lake

Another early morning walk around my neighbours fields failed to produce the Ring Ouzel – it must have gone by now. There was quite a gathering of gulls on the newly planted potato field along Red Barn Lane, including at least ten Common Gull. I continued my walk through Felbrigg but failed to produce anything particularly new on the water meadow. The male Mandarin flew in from the north, whilst I was standing on the middle path, and landed on the lake – joining a couple of Tufted Duck, male Gadwall and the pair of Garganey. As I walked along the dam I disturbed a group of Common Sandpiper – six in total, which eventually flew to the trees beyond the viewing screen and were pretty much lost to view. Butterfly interest today came in the form of an Orange-tip and Holly Blue – both new for 2016.

Over lunch, a couple of texts from Simon announced first the appearance over the park of a couple of Crane (my second miss in as many weeks!) and a group of three Greenshank which may or may not have landed. An afternoon walk around the park and the parish produced few surprises, except a wonderful Tawny Owl, just over the boundary in Sustead parish. 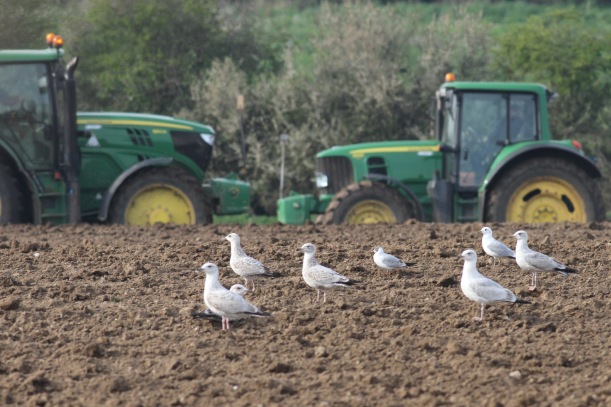