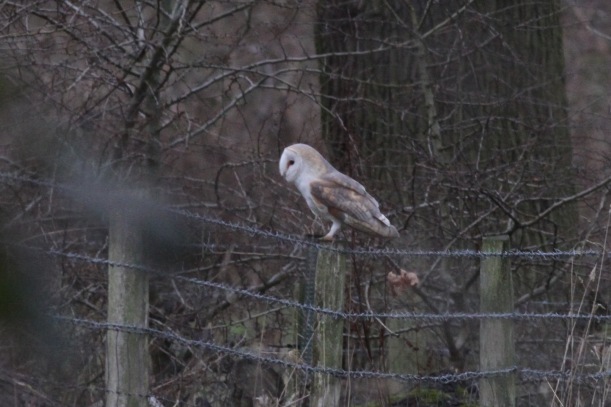 Just catching up after a couple of days away. Thursday was the day that ‘Doris’ came to call. We had a scheduled Felbeck Trust work-party in the morning, which it was too late to cancel. In the event, seven people turned up and we managed three hours of  productive activity, in relatively benign weather, before the wind became too strong to continue.

On Friday morning, I was out early to see if the storm had blown anything in. In the event, it was probably the opposite, with a noticeable reduction of wildfowl on the lake and water meadow. The Barn Owl was much in evidence as I walked down the middle track, by the side of the water meadow. Surprisingly, Wigeon numbers were still high – I saw 19, with the majority of them being males. The 1st winter Great Crested Grebe was still present on the lake, along with reduced numbers of the commoner ducks. I saw a total of eight Bullfinch on my walk, with pairs down The Street and in the hedge below the dam and four, including three males, in Stone Cottage garden. The rest of Friday and Saturday was dedicated to bathroom fitting at my sons house. 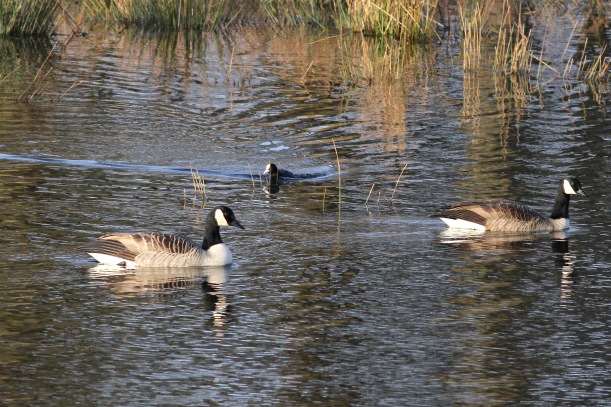 It was a glorious morning yesterday – warm, sunny and still. The usual mix of wildfowl were on the lake and water meadow, including a pair of Egyptian Geese, two pairs of Canada Geese, 19 Wigeon and three Coot. There were two Little Egret, one along the eastern edge of the lake near the reed bed and another feeding along Scarrow Beck below the dam. As I walked along the hedge which borders the beck there was a nice pair of Bullfinch playing ‘hide and seek’ with me. I was stood still near an ivy-covered bush  watching them when there was a loud flapping, which I assumed was a Woodpigeon. It turned out to be a Barn Owl, which came tumbling out of the bush and landed momentarily at my feet! It quickly composed itself before flying off towards Metton. Meadow Pipits were more in evidence on the rough grazing meadow and I noticed a pair of Linnet back on territory near The Warren. I headed up to the Old Deer Park to look for the Redpoll, without success, but I did find a nice flock of a dozen Siskin. Along Red Barn Lane, on the way home, there were a couple of Fieldfare in the long hedge of Mallett’s Meadows and four Roe Deer in the field. 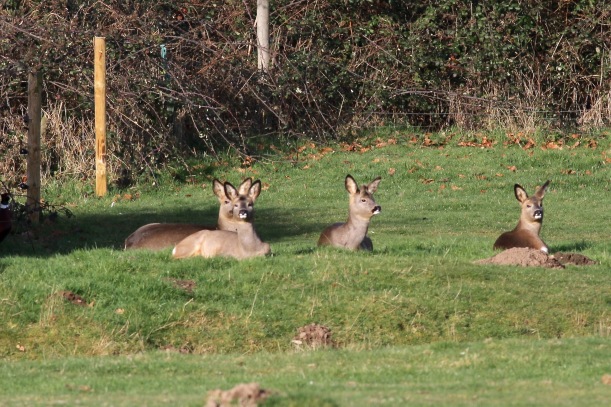 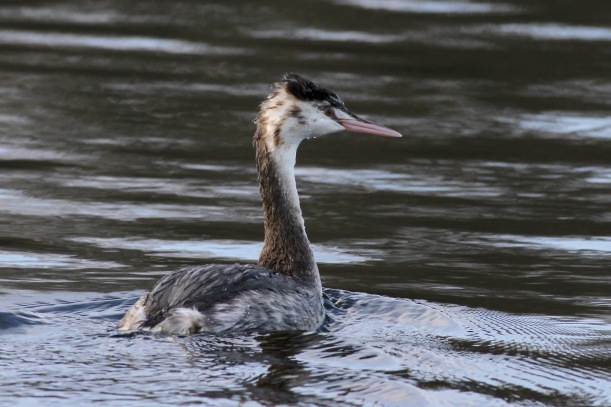 Thursday, Friday and this morning have been taken up with Felbeck Trust work-parties and nest-box events at Sustead Common and Mallett’s Meadows. See the Felbeck Trust website for further details. So this afternoon I treated myself to a bit of birding. All the action was at the lake, with the top bird being a 1st winter Great Crested Grebe – only my third ever record at Felbrigg! The supporting cast was also good with a Lesser Black-backed Gull in the roost and a Little Egret feeding along the eastern edge. Other birds of interest included a new pair of Coot (now two in total) and 19 Tufted Duck, including a couple of possible hybrid types – more research required. Later I walked up to the Old Deer Park and the woodland pasture behind the Hall, looking for the Redpoll flock – which I eventually found. I only saw seven Lesser’s however and they were very mobile.

Two of the reduced flock of seven Lesser Redpoll 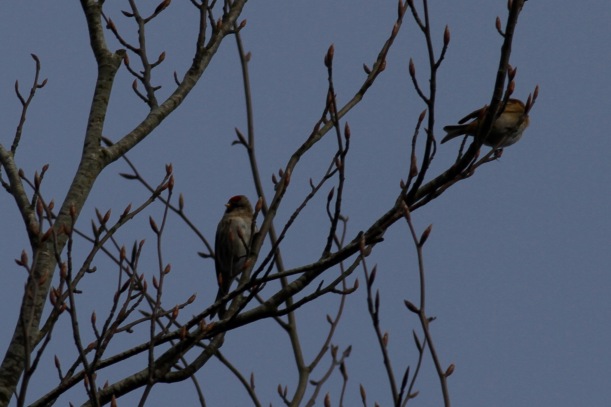 .. and Little Egret – first for the year at Felbrigg

Yesterday it was the NENBC mid-week walk in Felbrigg. Over twenty people showed up, on what was supposed to be a nice sunny morning but which, in the event, turned out to be rather wet. The undisputed highlight of the morning came right at the end, as we headed back towards Sexton’s Lodge car park. As we crossed the top end of the Old Deer Park, a flock of finch-like birds flew out of a near-by Birch tree. In the dim light they looked like candidates for Siskin, but they didn’t call as Siskin usually do and as they settled, I could see at least one was a Redpoll. With better views it quickly became apparent that they were all Redpoll, of the cabaret or Lesser variety, depending on your taxonomical disposition. As we studied the somewhat mobile flock, one of the birds stood out as Mealy – slightly larger, greyish tones, brighter wing bars, pink flush to the breast and more noticeable red crown patch. On one occasion, as they flew between the trees, the whole flock gave their characteristic sharp, metallic call. These are the first Redpoll I’ve seen in the park this year. 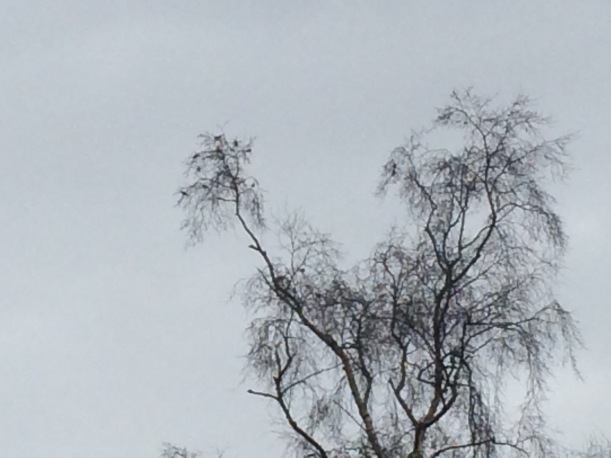 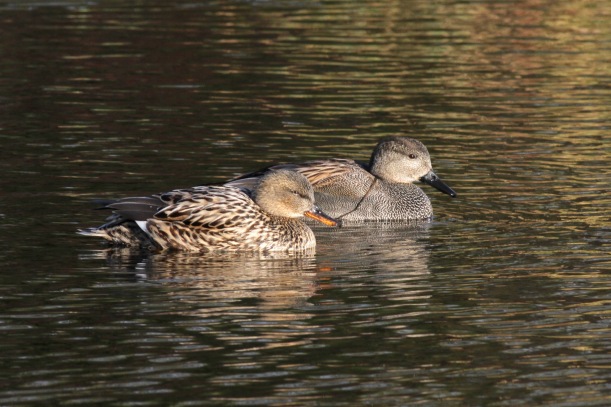 Two of the 57 Gadwall on yesterday’s WeBS count, Felbrigg

Yesterday afternoon, in the continuing cold and sleety weather, I managed a circuit of Felbrigg Lake, doing my WeBS count. There were very few small birds about and virtually no change in the wildfowl. Coot numbers have doubled though – to two!, the imposter pair of Mute Swan on the water meadows appear to have moved on and the number of Teal and Wigeon have decline – I could only find 13 of the latter. A Marsh Tit and Goldcrest were around the viewing screen and there were two female Bullfinch and a Great Spotted Woodpecker in the western shelter-belt.

This morning it’s still sleeting but I did manage brief views of two Hawfinch before they flew off west. They are now ranging far and wide around the village and, I suspect, Felbrigg Park too. 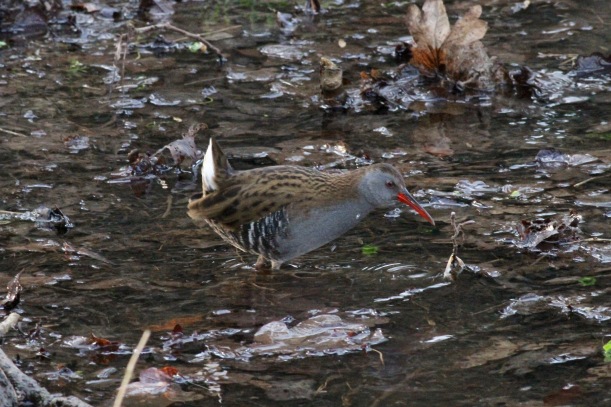 The Water Rail was exceptionally confiding, feeding in it’s usual spot along Scarrow Beck. From the shelter-belt I could see across the water meadow to what was obviously an increased Wigeon flock. It wasn’t until I’d done the loop around the lake and was returning along the middle path though that I realised by just how much. I counted twenty four in total – the biggest number this winter by a long way. After the eruptions, over the past couple of weeks, in the Mute Swan family dynamics, I was surprised to see that all last year’s youngsters are still present – albeit spread out across the lake and water meadow. They’ve been joined on the water meadows by another pair of adults. In the rough grazing meadow, at the southern edge of the Old Deer Park, I counted eight Song Thrush, two Redwing, a pair of Mistle Thrush and numerous Blackbird. A Green Woodpecker was in the oaks to the east of the lake.

I’d just arrived back home, mentally noting an absence of Hawfinch along my route, when a sizeable flock flew up and over The Street, perching briefly in some tall White Poplar trees before flying off towards Felbrigg. There were at least ten – the highest count so far! 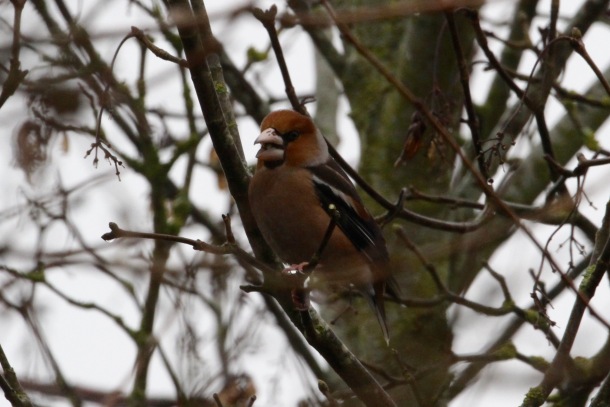 One of the Aylmerton Hawfinch

I was showing someone around the Felbeck Trust sites this morning. As we walked up the track from Mallett’s Meadows, towards Red Barn Lane, a small flock of birds flew up into the Poplar trees – six Hawfinch. So that’s where they’ve been hiding! For the first time in nearly a month, none appeared this morning in their usual ‘arrivals tree’.

Down at Sustead Common, a nice group of Bullfinch and a Woodcock, flushed from a ditch on the west side. 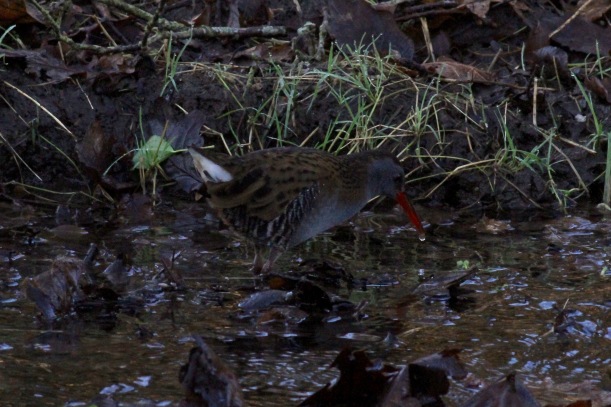 After my early morning vigil at the allotment yesterday, I walked a loop through Felbrigg Park, along the Weaver’s Way to Lower Gresham and returned via the Stone Cross. There were a few birds of interest along the way, starting with the obliging Water Rail, busy feeding in Scarrow Beck, just inside the back gate. The usual assemblage of wildfowl were on the water meadow and lake but I couldn’t find any Shoveler. Marsh Tit were calling along the western edge of the lake. On my way back from Gresham, a pair of Mistle Thrush were at the Stone Cross and eight Buzzards, engaged in display flights, drifted slowly west. In the afternoon I strayed outside the NENBC recording area, in search of a few much needed Norfolk Year Ticks, click link for details.

Another shot of this obliging bird in the early morning sun 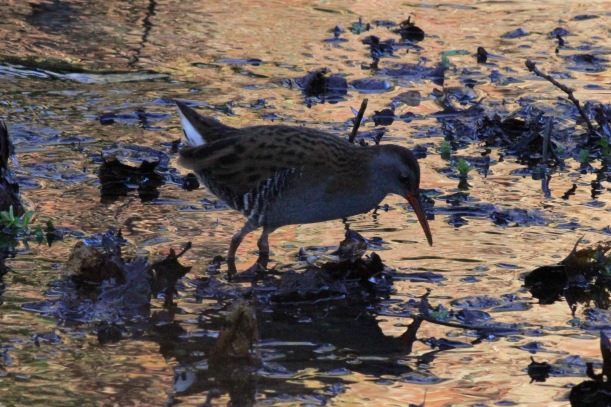 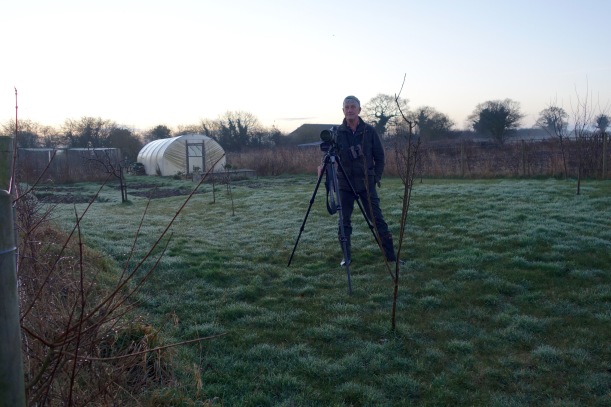 Me, at the allotments, for dawn

I did something this morning  I’ve been meaning to do for weeks – went up to the allotments for dawn, to see if I could get Hawfinch on my ‘Allotment List’. I’d been there about a quarter of an hour when I noticed a single bird sat in the top of the usual ‘arrival’ trees – Hawfinch safely on the list, at 07.26! Almost as quickly as it arrived, it and a couple of friends which appeared from nowhere, flew in a circuit around The Street and away, over the allotments, heading west. I tracked them through the telescope about as far as the Stone Cross – adding possible credence to the theory that the birds I saw in Gresham may well have come from the Aylmerton flock.

Other birds of interest included Bullfinch, Stock Dove, Green Woodpecker and several skeins of Pink-feet, heading north west – I wonder if they are on their way back north? From the allotment track, six Teal flew up the Scarrow Beck, another welcome addition to the Allotment List, bringing my total to 83. Just as I reached home a female Sparrowhawk dashed across the lane and over my neighbours garden, flushing four Siskin in the process.

Amazed to see nine Hawfinch this morning – equalling the previous highest count. My impression was that the numbers had declined over the past few days, as food supplies begin to dwindle – but apparently not.

Eight of the nine – one having just dropped to the ground! 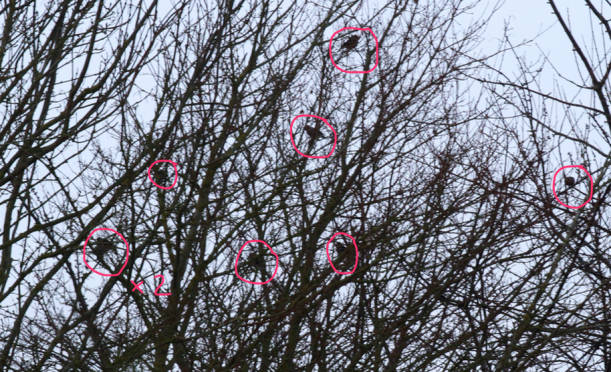