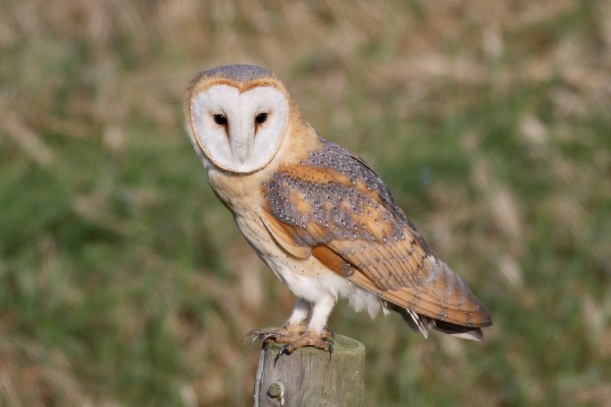 Barn Owl – unfortunately not photographed at Felbrigg in 2018

My last post of 2019. Looking back over the past year, one of the most notable changes in my local patch birding has been the steady decline in Barn Owl sightings. I’ve seen fewer this year than in any previous ‘AND’ year and none since 18th July. Lets hope for an upturn in their fortunes in 2019.

I had to check on the feeders at Sustead Common yesterday, so we walked down and back through the park. The weather was surprisingly mild, reaching 13 deg. by mid-afternoon. Water-levels on the meadows continue to rise, attracting more and more ducks. There were lots of Teal (not enough time to stop and count them) with a few Wigeon, Mallard and Gadwall mixed in. On the lake – where the levels remain low due to the construction work – there were ten Tufted Duck and the two male Shoveler of interest. There were a couple of Marsh Tit in the western shelter-belt. On the way to Sustead we had a Grey Wagtail near the Field Study Centre. The feeders continue to be popular at The Common but the emptying rate is beginning to slow, at last. In the Alders by the beck there was a flock of a dozen or so Siskin, but no sign of the Redpoll reported here a few days ago. On the way back home we watched a group of five Buzzard circling over Common Plantation. Jake spotted another raptor chasing the Wood Pigeons – it was a juvenile Peregrine. Presumably the same bird which has been seen in the park a few times over the past month and possibly roosting on Cromer church tower?

I’ve had a sleepless night – I knew there was something wrong. This morning, as soon as it was acceptable to creep past our sleeping Christmas guests in the lounge, I checked my map of the NENBC area, only to confirm my nightmare – that yesterday’s reported Dipper is a couple of hundred yards outside the Club recording area:( and, even if it stays in it’s current general location i.e. around the lock basin and river bank, south of the Happisburgh Road bridge, it’s just not possible to see it from within the area. Gnash and double gnash!!

You just never know what’s going to turn up locally. The first messages about a Black-bellied Dipper at North Walsham started coming through whilst I was at the doctors. A quick lunch and we travelled, en famille, to the location at Cubbit’s Mill. The bird was  obligingly sitting on the river-bank, fifty yards south of the bridge. This is only the second Dipper I’ve seen in Norfolk. On the opposite side of the road was an equally obliging Kingfisher and, when we went back with Phil for a second look, a Grey Wagtail on the same stretch of river! A walk around Pigney’s Wood in between times produced a second Kingfisher, but little else. Still no complaints from me!

and a Kingfisher for good measure!

I did manage a quick walk around the park yesterday, just as it was getting dark, to blow the cob-webs away. Very little of note in the damp and dark conditions. Five Tufted, two Wigeon and a couple of Shoveler were the main interest. Too dim to take any pictures – even if there was anything to photograph!

Wishing all regular readers of this blog a very Happy Christmas and a nature-filled 2019. 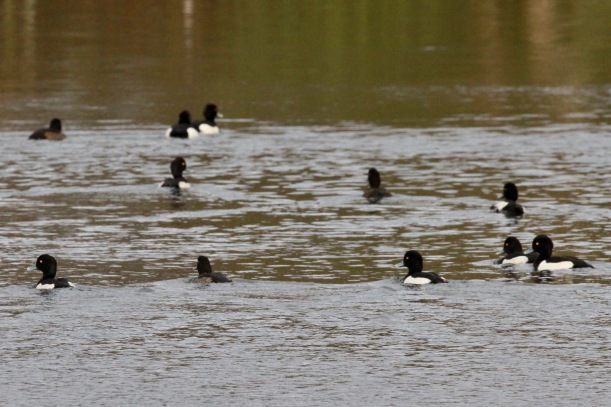 Already we’re past the winter solstice and looking forward to lengthening days once more. I did manage to fit in a morning walk around Felbrigg yesterday between various jobs. The weather was splendid, with clear bright skies and sunshine – in marked contrast to the last couple of wet & and overcast days. There were very few small birds in evidence – just an odd roving tit flock in the western shelter-belt, including my first Marsh Tit for a while. Down on the rough grazing below the dam I could only find half a dozen Goldfinch and three Meadow Pipit, with no sign of the Stonechat – which may have finally moved on now – or any Snipe. The wildfowl on the water meadow and lake provided most interest. Teal numbers are steadily increasing – I counted 236 – with five Wigeon, three Shoveler still, and a raft of 11 Tufted Duck. Several skeins of Pink-feet flew over, heading east. In the lane coming home Chaffinch, Goldfinch, Greenfinch & Bullfinch.