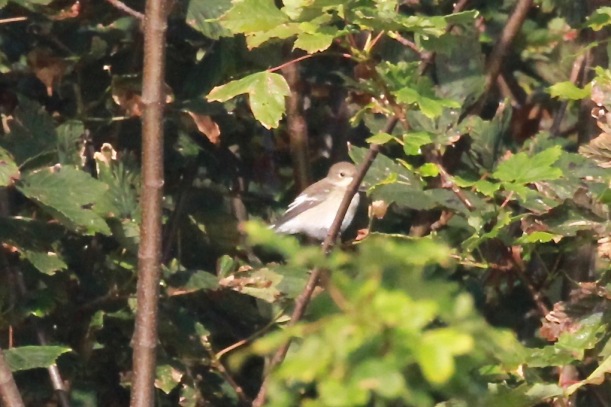 One of two Pied Flycatcher in Warren Woods, Cromer

My intention was to go sea-watching this morning, but when I got to the east Cromer cliffs its was flat calm with a gentle off-shore breeze and 100% visibility. Not ideal conditions so, instead, I took a stroll along the cliffs to the golf course and back. I encountered several mixed feeding flocks, which included: 3-4 Willow Warbler, several Whitethroat, Garden Warbler, two Lesser Whitethroat, Chiffs & Blackcaps, as well as four species of tit. I’d just got back to the eastern edge of Warren Woods when a Whitethroat appeared right in front of me in the gorse. Whilst waiting for a photo opportunity I noticed a gleaming white-fronted bird high up in a Sycamore tree. A quick check with my bins and it was a Pied Flycatcher – my first for the year and a ‘new area’ tick. Moments later a second bird appeared alongside it. I’d nearly reached North Lodge Park when I noticed a Wheatear sat on the roof of the last house before the park. Exactly the same house where I had one in the Spring. Down on the beach Andy was looking at the gulls. I joined him briefly but, as has been the case recently on my early-morning visits, there were no interesting birds amongst them. We’re off now for a few days to southern Spain – hoping for a bit of raptor migration. 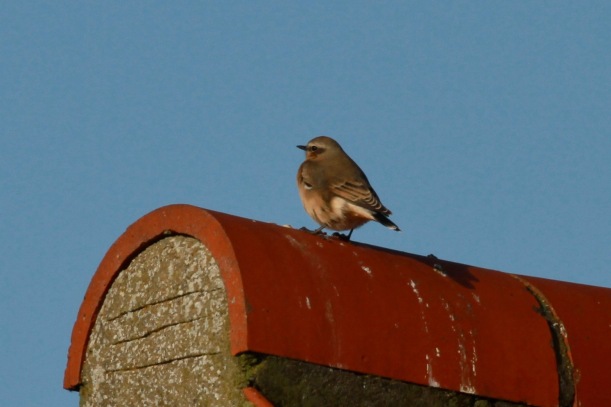 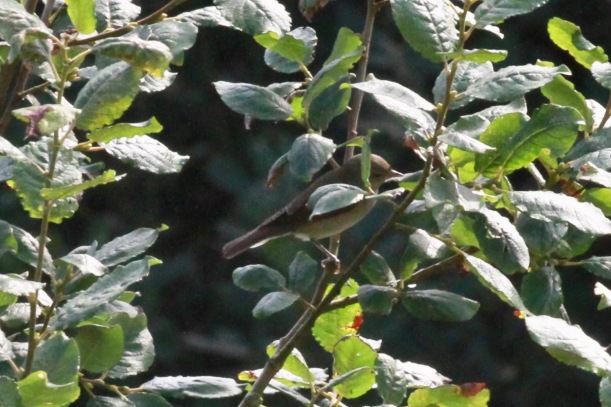 Cley NWT continues its recent run of good waders. Monday’s haul included half a dozen Wood & Green Sandpiper, 7 Curlew Sandpiper, Little Stint and a few Bar-tailed Godwit, amongst the more regular species. Felbrigg this morning produced my first autumn Willow Warbler, in a mixed flock feeding in the reed-bed Alders. Coal, Blue, Great and Long-tailed Tit, Goldcrest and Chiffchaff were also present. A Water Rail was squealing near-by and a late Reed Warbler was chucking in the reeds. A Common Snipe flew in from over the lake. Wildfowl included three each of Gadwall and Teal as well as the Mallard flock. The post-breeding build-up of Mistle Thrush numbered at least 23 on the sheep pastures, whilst there were 16 Cormorant in the roost.

An obliging Migrant Hawker at Felbrigg this morning

My morning sea-watch yesterday at east Cromer produced very little – a few Teal heading west, 50+ Sandwich Tern east and a juvenile Mediterranean Gull on the beach were the highlights. This morning in Felbrigg Park was more productive. – it was warm, even before 7.00, with very little wind and plenty of birding interest. The highlight being four noisy Green Sandpiper flying around the lake and attempting to settle on the dam wall – until, that is, they were disturbed by dog-walkers. Four Teal and a couple of Gadwall added interest to the moulting flock of Mallard. There was a brief fly-over of a pair of visiting Mute Swan but they were quickly discouraged from landing by the resident family. Along the edge of the water-meadows and reed-bed there was a family party of Blackcap, two Chiffchaff, Whitethroat and a Reed Warbler. Over Common Plantation there was a Hobby. Despite seeing the odd individual over the summer, I very much doubt that they bred this year in the south of the park. On the way back through the shelter-belt plenty of Nuthatch and a Treecreeper. Along the lane, two Bullfinch and a singing male Blackcap. Unfortunately no sign of the Pied or Spotted Flycatcher – reported by Tim & Dawn yesterday.

Juvenile Little Grebe – now were did that come from?

I’m still catching up on jobs after our mini-break, so very little time to do any nature-watching. Cley on Monday was good, with a reasonable selection of waders – best of the bunch were half a dozen or so Green Sandpiper. A sea-watch on Wednesday morning produced nothing particularly special – plenty of Sandwich Tern going east, with a few Common mixed in. Perhaps the most notable wildlife event were the pair of Common Darter observed ovipositing in the recently constructed garden pond in Cliff Avenue. It’s remarkable just how quick these micro-habitats get discovered. The same 5′ x 3′ pond is already a regular drinking pool for Goldfinch and a bathing spot for Blackbird.

Best of the bunch at Cley NWT on Monday – Green Sandpiper 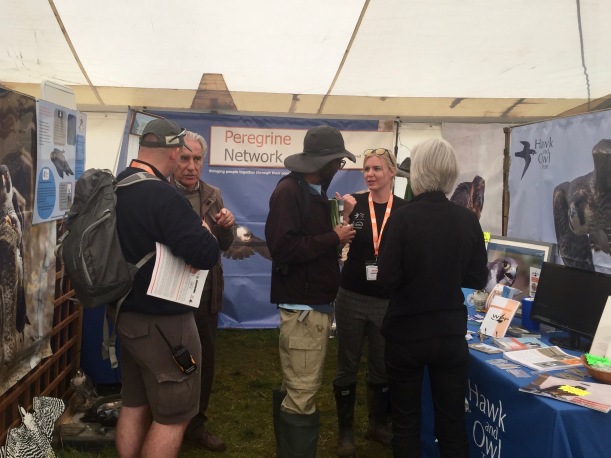 We were at Birdfair yesterday, catching up with old friends and being a small part of the Peregrine Network stand in marquee 8. Off to Cley for the day – I’m hoping for a great ‘birthday bird’! 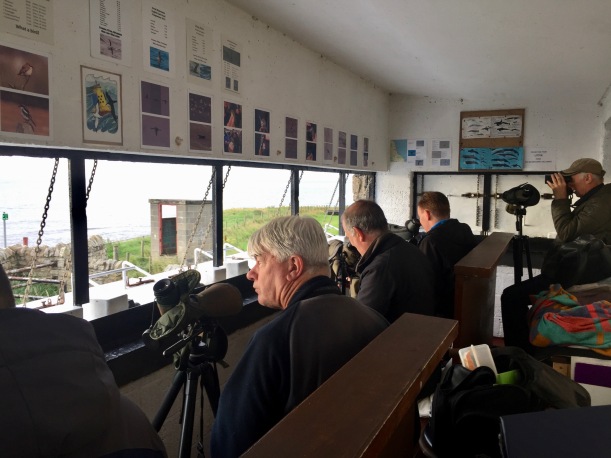 The very well appointed sea-watching hide at Whitburn – a bit of a step-up from the shelters at Sheringham or Cromer!

We’re up here in the North East for a couple of days, staying with friends Neil & Nicola, before heading south to The Bird Fair tomorrow. His new house is five minutes walk from Whitburn Bird Observatory – fully equipped with an excellent sea-watching hide. It’s always interesting ‘guesting’ on someone else’s patch, with things familiar and stuff that we see less of in Norfolk. Here, not surprisingly, lots of Kittiwake, Fulmar, Auks and Terns – with a few duck (a flock of seven Shoveler caused quite a stir), Common Scoter, Teal, a couple of Red-throated Diver and the odd Manx. I missed the Black Tern though.

Every picture tells a story! The variable speeds for different sections is interesting. 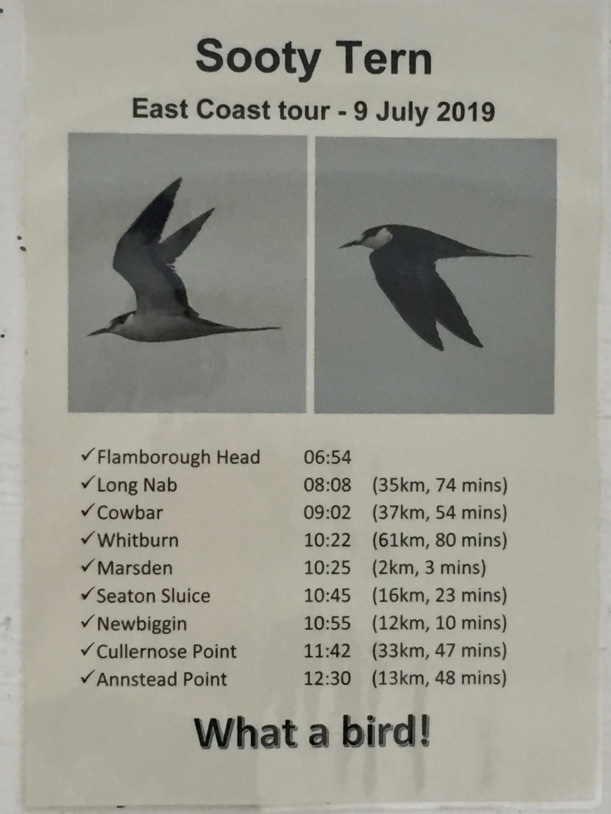 Whinchat at Felbrigg – Autumn is here!

It was incredible at Felbrigg this morning – just when you think the place has gone off the boil! I went down early to see if I could finally connect with Spotted Flycatcher – after several multiple reports in the last few days. Nothing in the shelter-belt as I walked towards the lake but then the tell-tale ‘out and back’ flight of a bird from one of the Alders near the top sluice. Spotted Flycatcher – probably a juvenile. Unfortunately still too dark for a photo. Around the other side of the lake a soft ‘tacking’ coming from the reed-bed put me on to the Whinchat. It perched briefly on the wires before going back into the reeds. As I was watching the Whinchat a piping call came from near the island. A Kingfisher did a turn around the lake before disappearing into the bushes near the viewing screen – my first in Felbrigg this year. At the Weaver’s Way crossing of Scarrow Beck, just below the dam, I flushed a Green Sandpiper and a Greenshank! They both flew around before settling again on different stretches of the beck. Later at least one and possible two other Green Sandpiper at different spots. Back at the lake seventy plus Sand Martin were hawking insects and resting on the wires – many of them juveniles. A Whitethroat and Reed Warbler along the eastern edge of the lake rounded-off a magical morning. It’s Autumn and Felbrigg is coming into its own.

Kingfisher does a turn around the lake – my first here since last November. Record shot

Loads of Sand Martin over / around the lake, including several approachable  youngsters