It’s become a bit of an AND anniversary tradition for me – beating the parish bounds. This year I had the pleasure of the company of son Matthew and good friends Bob and Sue for the 12 kilometre walk. For details of the route and changing scenery please click this link. Our excursion was completed in a reasonably leisurely three and a half hours, this year for a change walking in a clock-wise direction. Because of other commitments the walk was undertaken at the end of August – a few weeks earlier than normal. As a consequence the bird-count was rather low, at just forty-five, with no particular stand-out species, just good selection of parkland and farmland birds. Still, a lovely walk and pleasant company, taking me to parts of the parish I otherwise rarely visit. Here’s us at the finish – off for a much deserved brunch and beer!

Aylmerton Nature Diary is three today! I’d like to take this opportunity to thank all those people who have read, commented or contributed to this blog since it’s inception. Since beginning the blog it’s received over 20,000 visits, from nearly 6,000 visitors, from more than forty countries – amazing!

I wasn’t sure what to expect when I started back in September 2014 but this level of interest in the nature of such a small place is remarkable. It’s also testimony to the power of the internet that these, often incidental, wildlife moments can be shared by people living on the other side of the world – as well as your neighbours of course! Actually, I never really thought about ‘readership’ when I started, I did it mostly as an easy way to record and remember the wildlife events on my regular walks around the parish and through Felbrigg Park – a kind of ‘living diary’. Well here we are, three years on, and I’m still walking and recording – here’s to another year of AND. Cheers!

It was rather blustery this morning for what will be my last walk around the park for sometime. Not surprisingly there were very few small birds visible, with winds still gusting at over forty mph. At the lake the Tufted Duck flock had increased to ten, including the two Tufted X Ferruginous hybrids and there were still a pair of Gadwall hanging around. The BIG surprise came as I walked up the path towards Common Plantation, in search of Hobby. I heard a brief call before spying a juvenile, sat high-up in one of the dead oaks. As I looked closer I could see a second bird, half hidden, behind it – clearly another juvenile. Then to my absolute surprise a third juvenile on a branch just below them. These birds have been under near-constant observation since late August but as far as I’m aware no-one has previously positively identified three juvenile birds. This is an excellent record – a local breeding pair producing three independent off-spring. As Phil remarked the other day ‘this is the high-light of (his) Felbrigg year’ – probably mine to, but wait until you read my review of the AND Year, shortly!

On another note, I bumped into Ivan at the lake, who told me of a recent encounter involving a probable pair of Goshawk, over the western perimeter of the park. His knowledge of local birds and his description would suggest that there is a strong possibility that we’ve got visitors! Bearing in mind the obvious pit-fall of ‘large Sparrowhawk’, I’d be interested in any other records from blog readers.

Yesterday was Felbeck Trust’s Official Opening at Sustead Common, click this link for a more detailed account. This morning was my first WeBS count on Felbrigg Lake of the 2017/18 winter period. There were eight Gadwall – two pairs on the lake and three males and a female on the Top pond above the water meadow, eight Tufted Duck – including two hybrid Tufted x Ferruginous, the eclipse male Wigeon, at least one Water Rail in the reed-bed and a Grey Heron. A Sand Martin was feeding over the lake in the mixed hirundine flock,

and a lone juvenile Hobby was sat in a dead oak, at the edge of Common Plantation. 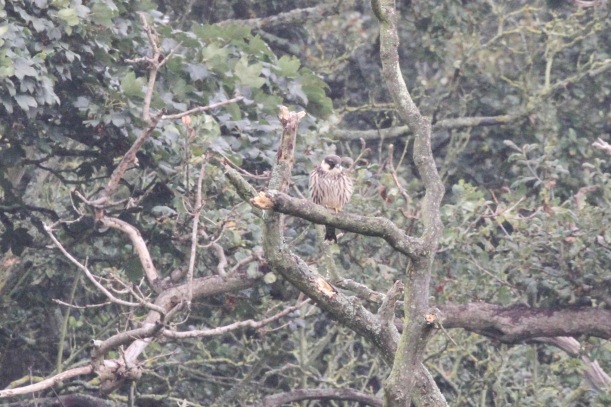 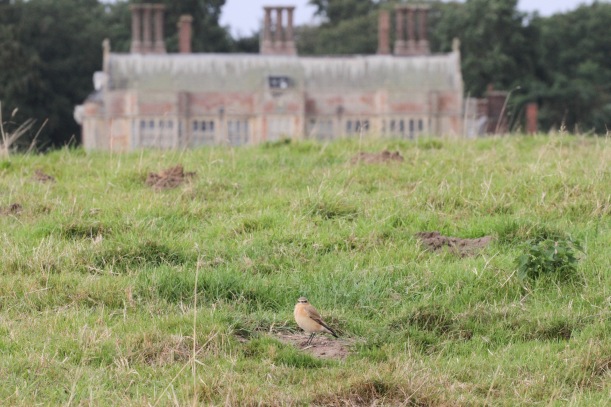 Wheatear in front of Felbrigg Hall

Finally caught up with the Wheatear at Felbrigg yesterday afternoon, after spending the morning with a Sustead Common work-party, making final preparations for the Official Opening on Saturday – for details see the Felbeck Trust website. Also of note in the park; a lone Sand Martin in with the Swallows feeding over the sheep pastures between the church and the lake, three Hobby still – two juveniles and an adult along the eastern edge of Common Plantation, and on the lake Wigeon, Tufted Duck and Water Rail.

Of great interest, George stopped me down The Street and told me he’d seen a Short-eared Owl twice in recent days in the area of Mallett’s Meadows / Aylmerton Common. Tim reported an ‘eared owl’ a week ago at his end of the village. Probably the same bird and a likely early migrant – there have been a few along the coast. It would be nice if it hung around for a bit.

Another shot of the Wheatear

Wigeon on the lake – previously reported as eclipse adult drake, but I’m not sure I could tell from these views

In a brief walk round, after Cley NWT yesterday, the most interesting stuff was on the lake. Four Teal, a female Gadwall and three Tufted Duck – one of which was a Tufted x Ferruginous hybrid, now clearly showing a white rear-end. This is feature of the latter species, though some Tufted do, occasionally, show some pale under-tail feathers – but never this striking. As I was walking back a Swift drifted slowly west over the Old Deer Park – lost in the hundred or so mixed ‘cloud’ of House Martin & Swallow, feeding over Aylmerton Common.

I spent most of yesterday morning watching the gulls on Cromer beach, so it was late in the afternoon before I managed to get into the park. There were no small birds to speak of as I made my way down the shelter-belt to the lake and nothing of interest on the lake itself. It wasn’t until I reached the far end of the rough grazing meadow that things started to hot up. I noticed a bird sitting on a fence-post – having thought it was probably just a Kestrel, I was pleased to discover it was, in fact, one of the juvenile Hobby. A few fence-posts further along sat the other. They eventually dropped down on to the ploughed field behind, before flying off towards Metton Carr. Here they quickly joined the two adults, who were engaged in a tussle with a Sparrowhawk. The youngsters joined in the fun and I was treated to the spectacle of four Hobby mobbing the poor bird, before it finally flew off west. Whilst all this was going on I was conscious of hearing a distant Curlew – now a scarce bird around Felbrigg. A few moments later it appeared from the east and flew silently over Common Plantation. I’d just started back along the middle path, above the water meadow, when my attention was caught by a pale bird by the edge of the small pond, along the Scarrow Beck. It looked pale enough to be a possible Common Sandpiper but it lacked the white hook in front of the wing and, when it flew from on side of the pond to the other, it showed dark under-wings – Green Sandpiper. This was probably a juvenile and different from the one that’s been present, below the dam, for the past three weeks.

Curlew – a scarce visitor to the park

Green Sandpiper – possibly a different bird than the one previously